Do you know what it’s like to be homeless during the winter in New Hampshire?

Neither did Craig and Mary Chevalier, until they joined a brave man from Derry who had opted to live for a week as a homeless man, so that he could experience what it was like.

“We spent one day with him, and we never left. We got connected with people,” said Craig Chevalier.

The experience touched Craig and Mary Chevalier so deeply that they were inspired to found 1269 Café (Manchester, NH). The original location was at 1269 Elm Street—hence it’s namesake, which they’ve carried on to this day—and it began modestly. 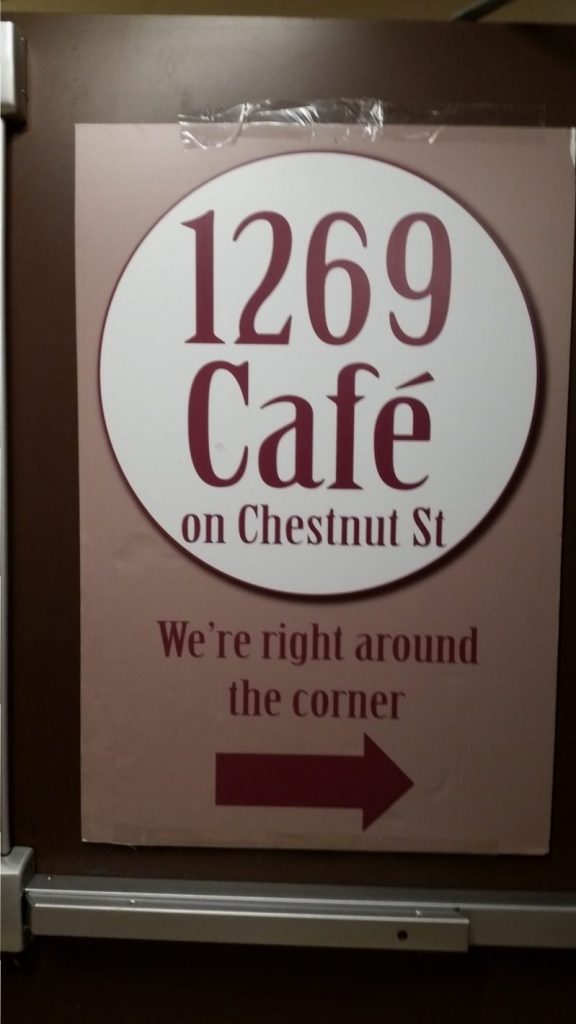 “We started with a few electric griddles and some donations from [a local] Hannaford’s. We were making grilled cheese sandwiches and handing out bags of chips,” said Mary.

“We fell into it,” agreed her husband, Craig. “We think it’s important to persevere and keep this thing going.”

Over the last 8 years, they’ve had to move a few times “in order to grow from small, to medium, to large,” said Mary.

1269 Café now serves 100-150 of the needy, Monday-Friday, and will soon expand to six days. Craig and Mary know almost all of their patrons by name, and they greet each one with a smile.

The circumstances that have driven the people they help into the streets range from substance abuse and mental illness, to no or under employment. While some shelters have restrictions on who they can take, and in what circumstances, Mary said, “We take everybody. We give people a place to get a good meal, hang out to get away from the weather, and even make peoples’ resources last a little a bit longer. If someone is down on their luck and having trouble making ends meet, the lunches they get can help reduce the cost of living, even if it is just a lunch. We help people on the edge.”

The Chevaliers say that Café 1269 feeds people physically and spiritually, and although ministering is part of what they do, they’re not preachy about it.

“Religion can be a part of what they get at the café or not. It’s up to them,” said Mary.

The café is more than a place for those in need to get a nutritious meal. 1269 Café has teamed up with the NH Food Bank Culinary Training Program so that those in need can learn skills that can get them placed in jobs, and ultimately off the streets. When the cold weather descends upon New England, 1269 Café transitions to a “warming station” as well.

“We give people a safe place to stay warm. Sometimes we’ll show movies, let people play board games, or maybe have some live music,” said Mary.

Their warming station is open from November to March/April.

1269 Café is located in the old Manchester Police Department at 351 Chestnut Street, 2nd Floor, which gives them access to locker rooms with showers, as well as laundry facilities.

All food, clothing, and monetary donations go directly to help people in need.

For more information, or to donate to this wonderful charity, please visit: http://homenh.org/.